The Aristocats: The Review

I have always believed this to be one of the more under-rated Disney films. It was always a strong favourite from my childhood and I believe that my love for cats originates from this movie. It gives us the memorable character of Thomas O’Malley, the true cool cat, who beats Top Cat any day of the week. Every other character gets you from the moment they appear on the screen, from the British ducks to the crazed lawyer. It is hard to resist a smile stretching your mouth, as you watch this movie, child or not.

It has been criticised for following too closely to the Lady and the Tramp, trying to rekindle some of the glory that Disney lost, when Walt died. There are startling similarities with the rich, pampered cat finding solace in the guidance of the street-wise, Thomas O’Malley. It could even be argued that this is the cat-lover’s Lady and the Tramp. However, I cannot quite bring myself to criticise it for that. It gives its audiences several loveable characters. The Duchess could have easily been a pompous, annoying character, but Reitherman handles her well. The kittens also fall the right side of childish, their habits hitting the cute meter rather than the irritating one. 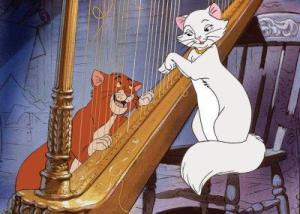 If you do watch this movie, try not to chuckle at the opening lyrics to this song.

I do believe some of the characters could be used a little more. The horse, Fou-fou, seems to do little more than just be an amusing character for the scenes she is lucky enough to be in. At least, she makes the final showdown in the stable, while the two red-neck dogs never really get an encore. All of the emphasis appears to be on the cats, while it should have maybe focused a little more on some of the other characters. Take Roquefort for example, the mouse who befriends the Duchess. The movie always suggests that the character is moments away from setting out and becoming a vital part in the rescue of the Duchess. However, he never seems to take control of the story, until Thomas O’Malley asks him for help. His character could have become a strong figure, yet the writers appear to miss a trick.

Also, Edgar, the film’s villain, is lacking somewhat. I believe this is one of the reasons the Aristocats isn’t as famous a film as it deserves. Edgar doesn’t have any stand-out qualities as a bad guy, like the villains that made ‘the Hunchback of Notre Dame’ and ‘Aladdin’ so great. He is even introduced as a clumsy, happy-go-lucky character, until events don’t turn his way and he literally announces to the audience that he has just become the film’s antagonist. I could have done with a little more foreshadowing and cheesy villain qualities. It’s not as though his actions aren’t good enough: threatening the kittens with sending them to Timbuktu is one of the most memorable moments in a Disney film in my book. I just felt that more could have been done to cement his character into Disney history.

The cats themselves are allowed the free reign of the script and they steal the show. Not only do we have Thomas O’Malley, as the top cool cat in the area, but when we are introduced to Scat Cat and his gang of jazz-crazy felines, the film cranks up a gear. We are treated to catchy memorable numbers and the fun is thrown into the maximum. This film feels fairly short, so I would have liked more street-cat sequences to be added to the film. The journey back to Paris feels like a token effort, rather than exploring the true life of a street cat, that we would have got with more modern child movies. Saying that this film took four years to make, so it feels wrong to ask for a longer running time. The scenes we are given are fun and jump out of the screen at us. Children will love this movie.

Final verdict: What we are given is great, but there is a sense that more could have been done a little more to make it a true Disney classic.