I was not expecting Looper to be as good as it was. Sure, the names attached should have let me know that what I was about to watch would be amazing, but I didn’t clock this as a show-stopper. Maybe it was something about the very subject of time-travel. It is rarely done right and often gets so complicated that it slows the movie down. For whatever reason, I began ignoring the critics, when they swore that Looper was the next Matrix movie. In honesty, they were wrong. This film is nothing like the Matrix, but if you want something a bit more drama-based and gritty, then you might find this much better.

As soon as the film opens, we are given something a little different. This time travel movie may have Sci-Fi elements, but it feels more like a gangster crime thriller, with the protagonist, Joe, shooting his way through several victims, before heading to a strip club. He rattles through exposition, setting up the scene. He is a Looper, working for future versions of his gang, who send him people to kill, as it is harder to dispose of bodies in their time period. To avoid loose ends, a Looper’s contract is terminated, when their own future self is sent back to be killed by them. When Joe’s future self turns up, ready to be executed, the film kicks into an action thriller. 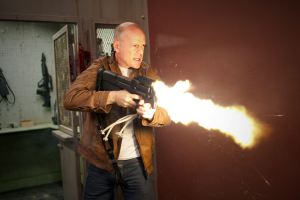 There is a horrific scene very early on in the film, when a future Looper is on the run. The bad guys capture his past self and begin mutilating him. We see his future self disappearing before our very eyes. It is a tough watch, gruesome and brilliant at the same time. It sets the tone for the film, as the audience is aware how far Rian Johnson is willing to go. This film handles some dark issues, especially the direction Bruce Willis’s character takes. It is a credit to everyone involved that it manages to stay tasteful.

Time travel never really ruins the plot. Sure, if we look hard enough, there are some plot holes in the movie, but there was always going to be. There is a fantastic moment in the film, when Bruce Willis’s character is given the job of explaining this universe’s concept of time travel. Rian Johnson chooses to breeze over explaining it, a great comical moment. We don’t need to try and understand time travel; it is our job to be entertained.

The performances are incredible. The three leads are perfectly suited for their roles. Joseph Gordon Levitt is an up and coming star, showing off that he can match Bruce Willis. I was worried the use of prosthetics to make Levitt look more like a younger Bruce Willis would become distracting, but Levitt carries it well, following up with just a trace of Willis’s accent. As for Willis himself, he is given a much more complex role that the actor has been allowed to tackle in a while. Sure, there is a trace of tough older figure that doesn’t look out of place in a Die Hard movie, but Johnson’s story takes him down some interesting routes. Willis’s character does some nasty things and somehow the actor makes his character sympathetic. For this reason, I am awarding him man of the match this time around.

Emily Blunt takes up the final lead and she is better than I have ever seen her before. Blunt has been given easy roles for a while now and it is refreshing to see her get to grips with a character that lets her show off her true talent. She is a good female role model and there is always a sense that she could kick ass, although there is never a specific moment where Johnson full on says it. Together these three leads are incredible and Johnson handles them perfectly.

Final verdict: Best original screenplay of 2012 in my book. Maybe the best time travel movie of all time.