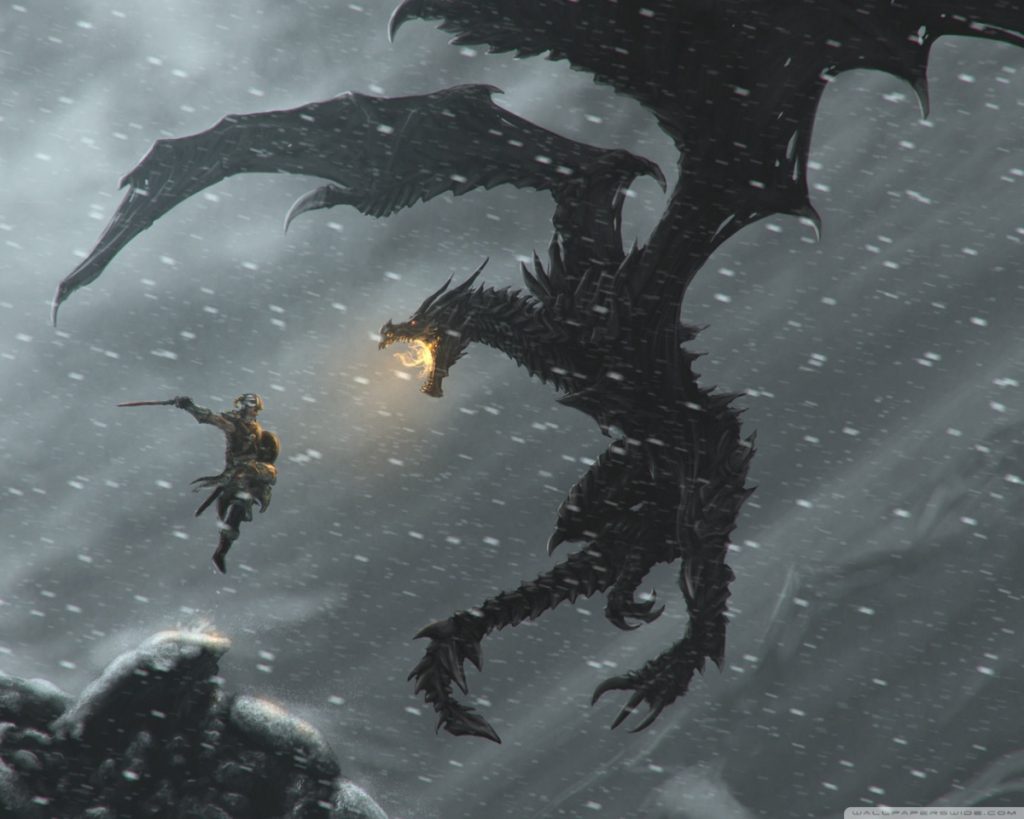 I am not disputing that Skyrim isn’t a great game. It is a thing of beauty, inviting the player into a rich landscape, filled with stunning sights, impressive creatures and vivid towns. Your player can take nearly any form, join any army and pretty much make his or her own story out of the game. Everyone working on this game deserves a round of applause. It is a work of art.

Then why the hell can’t I play it? Out of all of my games, it is the one that I keep dropping and starting again more than any other. And each time, it thwarts me, cruelly reminding me that the game is too good for the likes of me. I have whittled down three possible reasons for my inability to synch with the game. Hopefully, some of you may even emphasise.

3 – WHEN THE GAME WANTS YOU DEAD, YOU’RE DEAD

The problem with having all of Skyrim open to you from the start, is that it is possible for the eager adventurer to travel to locations above his or her level. At least, with Grand Theft Auto, when you are good enough to progress, it unlocks that part of the map for you. There is no such luck with Skyrim. Wanting to model my character as a mage, one of my first decisions was to find the College of Winterhold, unaware that the snowy areas hold the tougher monsters. It took me days to get past the Trolls, Ice Wraiths and Krosis that constantly butchered my poor wanderer.

One of the main reasons I quit the game is that, while questing with the College of Winterhold, you get locked in a tomb. It’s a short mission, you just make your way out to the other side. However, it took me ages to complete it. The Drougr made such short work of me, it was embarrassing. The second I faced a monster with a two-handed weapon, I might as well jot down my last will and testament, before I quick-loaded. It is partially my own fault; I quick-saved while locked in the tomb, so I was unable to leave and come back to this certain mission when I was a higher level. Also, I realised that my little brother, for no more reason than being a troll, switched my difficulty to Master, without me knowing (w*****).

That’s the problem with the internet… trolls everywhere.

But nevertheless, the game keeps stonewalling me. I will get a lucky streak on the go and then the game laughs cruelly upon me and raises the bar to an impossible level. I spend days hacking away at the same enemy, who lazily swats me aside, when he gets bored of me tickling him. It feels like I am forever a noob.

This is one of the bigger problems people have with open-world games and Skyrim is the worst for it. There is just to much to do. I will be happily making my way to Ivanstead to climb the 4’000 steps, when I get offered to do several different quests. It disrupts the flow of the game (wasn’t I in a rush to meet the Greybeards?) However, wanting to experience the game in its entirety, I do these quests and lose track of where I was.

Part of this is my main experience with Bethesda being Fallout. In Fallout, when the game ends, it ends and all of the bonus missions are forgotten. There is a sense that you have just missed out on all of the little secrets of the game. I treat Skyrim in the same way, therefore when I am signed up by the Companions, the Greybeards can go suck themselves, because I am finishing up this storyline. And then there’s the College of Winterhold. And the Dark Brotherhood. Oh, look a dragon. I’ve always wanted to check out Solitude. I am just too distracted.

OK, enough. I can beat it around the bush all I like, but the last two points are minor flaws. I can live with them. The truth is there is one over-lapping reason that I refuse to pick up a game of Skyrim…

1 – I AM TERRIFIED OF THE SPIDERS

Terrified. From the first time I met them on my way out of Helgen. I don’t know what it is: I thought I was over my arachnophobia. I had a pet lizard that demanded that I catch live spiders and feed them to her. I held my old fear in my bare hands. And in games like Tomb Raider and Lord of the Rings, which also makes you fight spiders, I don’t even flinch. But the Frostbite spiders… Chills on my spine.

Why did I even write this article, knowing I would have to Google Image the spiders?! Glurk!

They don’t even have to be there. The second a cave gets a little bit too ‘cobwebby’ I freeze up. It seems that each level has a ‘spider stage’ and it scares me. I was attacking a simple group of bandits and then sent pet spiders on me. Who has a pet spider?! Seriously.

I’ve seen my brother play ahead of me and I know that the next part of the game involves a big spider. And I just cannot bring myself to begin that mission. I am petrified. And that is the sad truth to me avoiding Skyrim… I am a big wimp.